The Best Party Hostels in Luxembourg

Hidden amidst its famous neighbors like Germany, France, and Belgium, Luxembourg is a country full of natural riches and pristine natural wonders. It offers the perfect getaway for students about to enter college or those who are on a gap year. The lush forests in the north, the rocky canyons in the east, the valleys to the south, and the fortified medieval-era towns offer scenic and breathtaking tourist attractions. 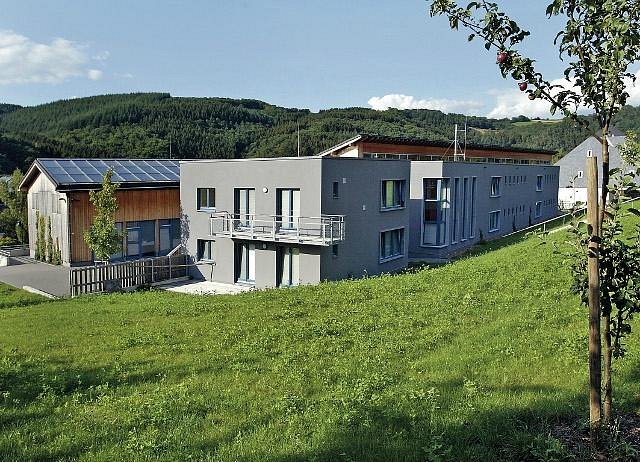 A significant worry for backpackers over the years was the cost of accommodation while traveling on a tight budget. It has been alleviated since the advent of hostels in Luxembourg. These hostels offer accommodation at cheap rates and also a chance to interact with random individuals from different countries.

What Are The Best Hostels in Luxembourg?

One of the first youth hostels in Luxembourg, it is the best value-for-money accommodation in the capital city. Only 15 minutes from the city center, this hostel comes with all the modern amenities. A lot of the major tourist attractions in Luxembourg city can be reached around 1-2 hours from the hostel. Also, the old town of Luxembourg is easily accessible from here, and the famous Modern-Art Museum is only a few minute’s walk away from this hotel. It is a must-visit attraction of Luxembourg.

Next up is the youth hostel in the picturesque, quaint town of Larochette. This place is famous among Swiss and Dutch travelers, who come to this town to relax. The Larochette Castle is this town’s most famous attraction and is located close to the YH Larochette. So, if you plan to stay at this hostel, you can also go on long hikes at the nature trails at the surrounding hills. They also have family-rooms which makes it an affordable, family-friendly accommodation.

At the southeastern portion of Luxembourg, is this backpacker-friendly hostel, which once served as a convent. The well-known Schengen Visa derives its name from the town close to it, which is also the major tourist attraction near this hostel. Hostellers should head to the European Museum Schengen, which is dedicated to a united Europe. The hostel also has all the amenities that you could ask for and is at a price that is a good value for students. Also, don’t forget to pay a visit to the vineyards in the area and taste the freshly prepared wines.

From the southeastern end to the southwestern side of the country, is the famous youth hostel of Esch-Sur-Alzette. Luxembourg’s biggest music venue – the Rockhal, where some of the most famous artists have performed, is only a few minutes away. The hostel is always packed with music-lovers and is the ideal place to meet other creative musical minds from countries around the world. Located close to to the railway station, it is easily accessible for first-time tourists too. Also, this is the perfect place to get some rest if you’re visiting your friends at the Belval campus of Luxembourg University or exploring the whole country.

Located in the Ardennes area of Luxembourg, the peaceful town of Vianden has a lot of renowned tourist attractions such as the hilltop castle, the Victor Hugo Literary museum, and several churches. Imagine a place centrally located from all these attractions, and you get this youth hostel. Hotels and inns in Vianden can be pricey, and this hostel comes as a boon for tourists who are on a tight budget. With numerous restaurants lined up nearby, one can also get a taste of an authentic Luxembourg cuisine.

What Should I Look For in a Youth Hostel in Luxembourg?

When looking for the right hostel, keep the following in mind:

Consider Other Factors Aside From Price

You might save by choosing a bunk bed in a big dorm, but you’ve wasted your money if it costs you a good night’s sleep. Pay attention to the location and atmosphere. User reviews can also be helpful, but I wouldn’t pay much attention to ratings for cleanliness or helpfulness of the staff (as these can be affected by preferences).

Be Prepared For Peak-Season Competition

The most famous hostels fill up every day, so don’t assume you can just show up and look for a bed (especially if you want to stay in a private room). If possible, you should book a hostel stay as soon as your schedule is set. Also, if you’re going to keep your itinerary flexible, try to book at least a day or two in advance. If a hostel shows as fully online, call, or email — they may be holding some beds for drop-ins. (For the best shot at catching a last-minute room, arrive first thing in the morning, especially if they close at noon — otherwise, you’ll be just one among the scruffy gang queuing up for the evening reopening when the remaining beds are distributed).

Although official HI hostels are technically only for members, nonmembers must pay only a few dollars extra each night. Unless you plan to stay mostly at HI hostels, membership may not be worth it, especially given the proliferation of independent hostels.

In some areas, budget hotels can make more sense than hostels. Especially if you’re traveling as a couple, a cheap hotel room can beat the price of a private hostel room. It is more likely in southern Europe (Italy and Spain); the farther north you go, the bigger the price gap between hostels and the cheapest hotel rooms. (In Scandinavia, for example, locals know that hostels provide the best — and usually only — $30 beds in town which explain all the Volvos you’ll see in hostel parking lots.)

The Youth Hostels in Luxembourg

Cons: Not very social and the breakfast is quite lacking

Cons: Not enough power outlets, not accessible by public transportation, and no Wi-Fi

Cons: No power outlets close to the bed, no secure storage, the windows have no curtains and no Wi-Fi on the rooms

Cons: Not accessible to public transportation and it’s far from the city center

Cons: Can get quite noisy and some beds have bedbugs

Luxembourg is a country located in northwestern Europe. One of the world’s tiniest countries, it is surrounded by Belgium on the western and northern side, France on the southern portion, and Germany on the northeastern and eastern border. Luxembourg has come under the control of numerous kingdoms and ruling houses in the course of its long history. Still, it has continued to exist as a separate, if not always autonomous, political entity since at least the 10th century. The ancient Saxon name of Luxembourg, Lucilinburhuc (“Little Fortress”), denotes its strategic position, and it is hailed as “the Gibraltar of the north.” It is also a major military route

that links the Germanic and Frankish countries.

In the 20th century, Luxembourg was one of the founding members of several multilateral economic organizations. Perhaps most notably, the grand duchy was one of the original members of the Benelux Economic Union (1944), which linked its economy with that of the Netherlands and Belgium and would subsequently form the heart of the subsequent European Economic Community (EEC; ultimately succeeded by the European Union).

Why Should I Visit Luxembourg?

Here are some reasons why you visit head to Luxembourg on your next trip:

The nation’s capital is a ‘two-floor city,’ with the Old Town emerged from a 10th-century fortress and today on a rocky outcrop above the surrounding forest. One of the best ways to get a glimpse of this area is by embarking on a two-hour-long hike known as the Wenzel Walk. It takes tourists along the city’s historic ramparts and sights, through cobbled streets with castle towers and churches. Also, don’t miss out on the Place d’Armes, a small square in the pedestrian zone, the Chemin de la Corniche, dubbed as “Europe’s most beautiful balcony,” more specifically a promenade with views over the valley, and the Bock Casemates, which are tunnels that cut through the stone cliffs. But the city’s highlight is the magnificent Luxembourg Castle, dating back to the Early Middle Ages. Not to forget, there are dozens more of museums worth paying a visit to, like Differdange Castle and Vianden Castle.

Luxembourg’s Little Switzerland, or Mullerthal’s eastern region, owes its name because of its Swiss-like landscape. The capital of Mullerthal is Echternach, and it is the oldest town in Luxembourg. If you happen to be there, you shouldn’t miss some of the city’s famous landmarks, such as the Roman Villa and the Benedictine Abbey of Saint Willibrord.

Aside from that, you can also take the Mullerthal Trail, which takes you to towering cliffs, lush forests, and scenic views.

Luxembourgish cuisine takes cues from German, French, and Belgian influences. So, you can come across some German specialties like Kaesespaetzle, a Swiss Rosti cake, or Carbonara, an Italian staple. Luxembourg’s cuisine developed mostly due to its geographical conditions and the cosmopolitan environment present there today, which makes it very unique. So, you should try traditional dishes like ‘Judd mat Gaardebounden’ (made from pork neck and broad beans), ‘Ecrevisses à la luxembourgeoise’ (a dish with crayfish), and ‘Träipen’ (fried blood sausage) with apple sauce.

It is probably the best news for all passionate travelers. Now, focus. For only two euros, you can buy a ticket on almost every train, bus or tram in the country, and ride it for two hours (twice longer compared to other European countries). Why two hours? Well, no town in Luxembourg is farther than two hours away. So, if you consider the landscapes and nature in Luxembourg along with the savings you’ll make by taking public transportation, you’ll see that it is worthwhile.

What Should I Pack For When I Head To Luxembourg?

Pants, socks, and underwear, here are some other items you might not have thought to pack.

Where Should I Go Next After Exploring Luxembourg?

Since Luxembourg is strategically positioned in the center of Europe, you can go to pretty much any country by rail, plane, or car. You can head to France, Germany, Belgium, the Netherlands, Spain, the UK, etc. But the closest tourist attractions near the country is the historic town of Trier in Germany, the Amneville Zoo in France, the EU Parliament in Brussels, and Amsterdam’s Red Light District. If you have extra time for some more adventure, you can also go to Dublin and Bucharest.

Where Can I Party on a Tuesday in Luxembourg?

If you want to experience the nightlife scene of Luxembourg on a weekday, you can head to Saumur Crystal Club, Liquid Bar, Coco Mango, De Gudde Wëllen, the Britannia Pub, HITCH, Brasserie QG Bar Lounge, and so much more

What Is Luxembourg Famous For?

As a representative democracy that also has a constitutional monarch as the head of state (Grand Duke Henri), the country is the only country left in the world that is ruled by a grand duchy. Also, it is a developed country with an advanced economy and one of the world’s highest GDP (PPP) per capita.

Do They Speak English In Luxembourg?

English and Portuguese are used by about one in five people. The national statistics agency reported that around 71% of the population spoke Luxembourgish, 56% spoke French, 31% spoke German, 21% spoke English, 20% spoke Portuguese, and 6% spoke Italian.

Do You Need A Visa To Go To Luxembourg?

Luxembourg is a party to the Schengen Agreement. It means that US citizens may enter Luxembourg for up to 90 days for tourist or business purposes without a visa. So, your passport should be valid for three months beyond the period of stay, and you need sufficient funds and return airline tickets.